The Real Word: What Does Zillow's Earnings Mean For Solo Agents?

The Agency Launches New Outposts On Both Coasts, Plus Canada

How To Scoop Up More Market Share In Feeder Markets

Keller Williams and others slam anti-LGBT letter to Florida agents

Not Just A Home! Why Lifestyle Matters Most In 2021

“We are committed to taking any action that is deemed appropriate and in the best interest of our association, our 1.4 million members, and our nation as a whole at the conclusion of these investigations,” NAR said in a statement.

Following a takeover of the U.S. Capitol building on Jan. 6 by a pro-Trump mob, the National Association of Realtors is not ruling out penalties for any of its 1.4 million members that participated in the riot, though the trade group has been quiet on specifics.

At least two Realtors, Jenna Ryan of Frisco, Texas, and Libby Andrews of Chicago, admitted in social media posts to “storming the Capitol” last week in a riot that resulted in the deaths of five people. A spokesperson for NAR declined to tell Inman whether the trade group was aware of any other Realtors participating in the riot.

Both Ryan and Andrews have faced intense backlash from members of the public and other Realtors calling for the removal of their real estate licenses and disciplinary measures from NAR. Ryan, broker at Jenna Ryan Realty, said on Twitter that she has had to close her company after receiving death threats. Andrews was fired from her former brokerage, @properties, but reportedly has received a job offer from another Chicago brokerage, Gold Coast Exclusive. The brokerage’s CEO, Kristine Farra, did not respond to a request for comment sent via LinkedIn.

Although Ryan later said in a statement that she didn’t “condone the violence that occurred on January 6,” in videos and posts on social media Ryan said she would be among those “breaking those windows” at the Capitol and later posted a photo of herself smiling in front of a broken window, saying,”Window at The capital. And if the news doesn’t stop lying about us we’re going to come after their studios next…” She also tweeted, “We just stormed the Capital. It was one of the best days of my life.” 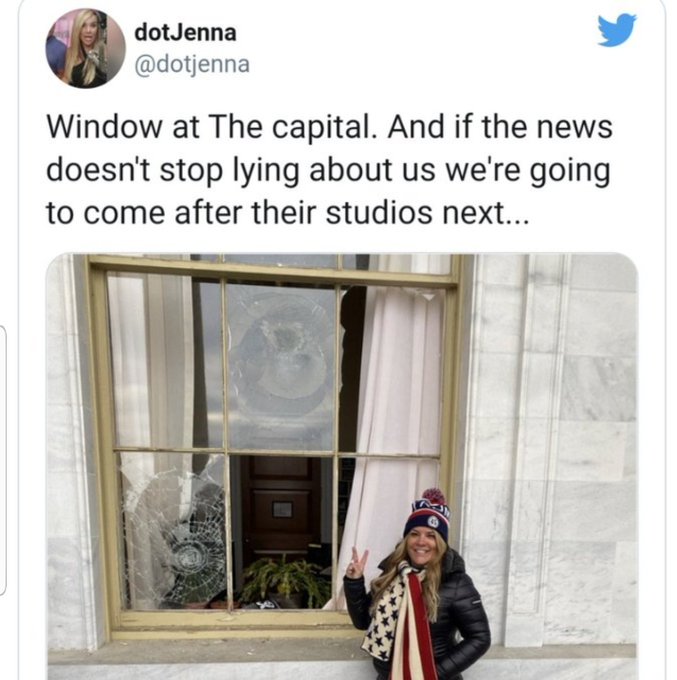 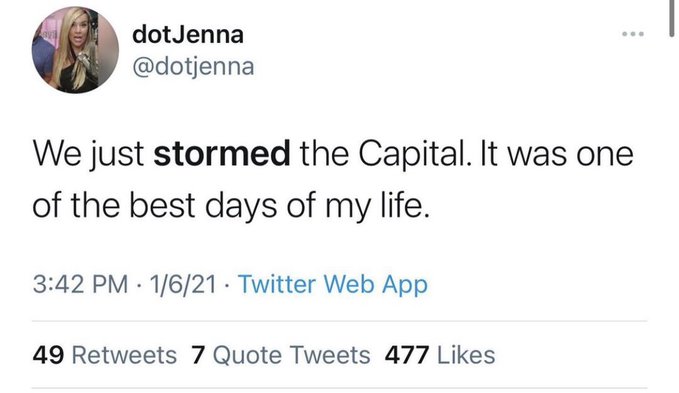 Texas real estate broker, Jenna Ryan: “I’m not messing around. When I come to sell your house. This is what I will do. I will f*ckin sell your house.” Then storms into the Capitol. pic.twitter.com/CVLJV6DjHz

NAR declined to comment on whether Ryan advertising her services in this manner constituted a real estate-related activity under the Realtor Code of Ethics and whether doing so while committing a crime violated the code.

NAR recently passed controversial changes to its professional standards to crack down on racist and discriminatory speech and behavior, including a change that applies the Realtor Code of Ethics to all of a Realtor’s activities, not just real estate-related ones. NAR declined to comment on whether any of the Realtors that participated in the insurrection have violated this or any other NAR rule, policy or its code of ethics.

“[A]lthough all violations of NAR’s Code of Ethics should be reported to and managed by local associations, please know that as NAR closely follows the legal proceedings that will accompany these investigations, we are committed to taking any action that is deemed appropriate and in the best interest of our association, our 1.4 million members, and our nation as a whole at the conclusion of these investigations,” NAR spokesperson Mantill Williams told Inman in an emailed statement.

“Know that we share [the] nation’s sentiments of discouragement and disillusion as we have witnessed tragedy unfold on Capitol Hill this week,” the statement continued. “We pledge to you that NAR is committed to doing everything we can to help heal and stabilize this nation in what is one of the most shocking and saddening weeks of our lifetime.”

NAR declined to comment on whether any Realtors that participated in the riot would face any consequences, disciplinary action or censure from NAR. When asked on Thursday if Andrews’ actions violate NAR’s new code of ethics policy, a spokesperson for NAR told Inman that the policy does “not apply to criminal activity.” NAR declined to comment on whether that statement applied just to the new policies enacted in November or the entire code of ethics. The trade group also declined to say whether some acts could be both crimes and violations of the code.

In 2018, NAR’s board approved code of ethics amendments that struck out language that previously prohibited an association’s professional standards committee from holding a hearing to evaluate an ethical complaint if the accused Realtor was involved in any criminal litigation related to the same transaction or event. The amendments allowed a professional standards committee to hold a hearing on the complaint at the discretion of an association’s grievance committee or board of directors.

NAR declined to comment on whether any such hearing is afoot for Ryan, Andrews, or any other Realtor that participated in the riot.

NAR encouraged anyone with information about “unlawful behavior” to report those violations to the FBI at fbi.gov/USCapitol.

“We stand with federal law enforcement as they work to thoroughly investigate this week’s events and ensure all those accused of breaking the law are prosecuted to the fullest extent,” Williams said.

NAR will be holding the third of its hour-long monthly training webinars on the latest changes to its code of ethics on Thursday, Jan. 14 at 11 a.m. Central.

Editor’s note: This story has been updated.