How To Get The Most Out Of Your Real Estate Investment

Putting In An Offer? 4 Ways To Sway Listing Agents And Sellers

Inman Interactive: Where Housing Costs Are Straining Budgets Most

How I Won A 20-Offer Bidding War For My Client

What One Real Estate Firm Is Doing To Boost Black Homeownership

The Real Word: Why Are There Discrepancies In Real Estate Appraisals?

The 7-Step Plan to Financial Freedom 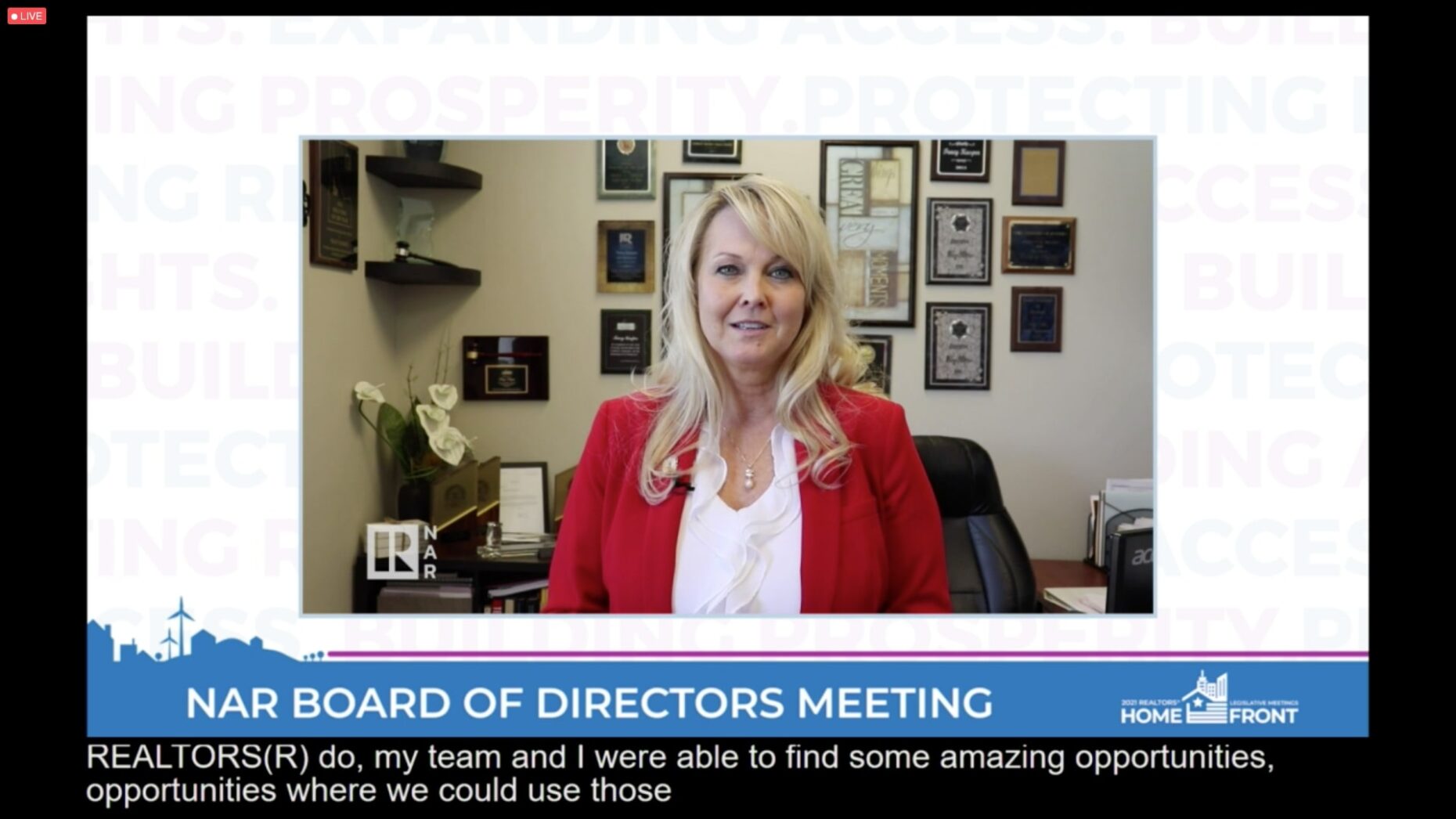 The National Association of Realtors‘ board of directors held their biannual meeting Friday on the last day of the trade group’s midyear conference, the Realtors Legislative Meetings, electing a new leader, approving a budget, passing new core standards requirements for local Realtor associations and expanding who needs to have a social media audit among NAR leaders.

On the leadership ladder

NAR’s board, which has some 800 members, elected Tracy Kasper, broker-owner of Berkshire Hathaway Home Services Silverhawk in Idaho, as NAR’s 2022 First Vice President, putting her on the ladder to serve as the trade group’s president in 2024. She beat Mike McGrew, CEO of McGrew Real Estate in Kansas and former NAR treasurer, in a close vote: 438-422.

“We have an opportunity moving forward to ignite others, to tap talent at every level, to make sure that our membership reflects the communities that we live, work and play in [and] that our leadership teams and committees reflect our membership.”

As part of its consent agenda, the board also elected Kenny Parcell as NAR’s president-elect and 13 regional vice presidents. Leslie Rouda-Smith, currently NAR’s president-elect, will automatically ascend to president at NAR’s annual meeting in November. Nancy Lane continues her two-year term as treasurer.

Realtor Party Director Kevin Brown offered a rosy picture of the finances of NAR’s political action committee, noting that, as of April 26, RPAC had raised $22.9 million — 59 percent of its $39 million goal for 2021.

Thirty percent of NAR’s members — 429,213 — have invested in RPAC so far this year, nearing the trade group’s goal of 37 percent and increasing the number of individual investors by more than 66,000.

The board approved recommendations from NAR’s Finance Committee to keep NAR’s membership dues for 2022 at $150 per year and to use 1.43 million as the basis for dues revenue in the 2022 budget proposal. That would bring in $214.5 million in dues revenue. NAR currently has a record 1.48 million members, but expects a modest decline due to challenges in the commercial real estate market following the pandemic.

NAR expects to bring in $47.48 million in non-dues revenue in 2022 and $50.05 million from its $35 special assessment for its consumer advertising campaign.

The board also approved 2021 budget adjustments to pay for NAR’s new mentorship program ($281,750, of which $100,000 will be for speaker fees), expansion of diversity and inclusion initiatives ($205,750, of which $50,000 will be for sponsorships) and a September 10 live telethon to support a fundraising campaign for the Realtors Relief Foundation. The latter is expected to cost a total of $445,000, of which $350,000 will go toward producing the event and $85,000 will pay a consultant for strategic event planning and project management.

Even with these adjustments, NAR will have $2.7 million in net income this year due to a rise in membership.

The biggest expense by far in NAR’s operating budget is its subsidiary and national property database, Realtors Property Resource, which will cost a net $19 million this year and $19.38 million next year.

Given how many lawsuits NAR is currently fighting, it’s no surprise that the trade group expects its legal expenses to rise to $7.8 million by 2025. NAR also expects to ramp up its spending on meetings and events, from $6 million in 2021 to $7.9 million annually in 2024 and 2025.

NAR’s agreement with zipLogix, which was acquired by Lone Wolf in 2019, to provide transaction management as a member benefit expires at the end of 2021, at which time NAR has previously said it would have the option to renegotiate it or seek other software options that serve members’ needs. There is currently no funding set aside in the 2022 budget for this item.

NAR’s board approved additional requirements for local associations regarding compliance with core standards, a minimum set of standards that they must meet in order to retain their Realtor charter.

Recommended by the Association Executives Committee, these include:

Read the rationale for each change:

In November, the board approved a policy that directed NAR’s Credentials and Campaign Rules Committee to establish a process for conducting a social media background check as part of the trade group’s review process for potential candidates for NAR elected office in order to “identify any issues in a candidate’s history that may cause an embarrassment to or shed negative light on NAR.”

On Friday, the board voted to expand that background check to NAR’s appointed leaders.

“With the growing use of social media and the resulting digital footprint, it is prudent to expand the social media review to include an audit of the online identity of NAR appointed leaders in addition to the elected officers,” the Executive Committee said in its rationale for the policy proposal.

As part of the policy change, the Credentials and Campaign Rules Committee would have the option of requesting that the NAR leadership team, and not the CCRC, make a final ruling regarding an appointed leader’s social media report.

None of the policy items approved by the board Friday elicited any discussion, other than a controversial multiple listing service policy that was ultimately approved. The directors approved all items overwhelmingly.

What Real Estate Agents Need To Know About Energy-Efficient Lightbulbs

Demand For Mortgages Sagged In April