Some folks want to make economics seem complicated. It ain’t. Any who, some charts depicting the US economy…through demographics.


First, 15 to 54 year old US population (blue line) and those employed among that population (green line). You may note the end of population growth among them in ’07 and not only the end but a significant decline in employment among them since ’07. This is the population that undertakes most of the credit (debt…which is also the population that creates all the new $’s via undertaking debt…vs. elderly who destroy $’s via paying off their loans), buys most the homes, spends the most, earns the most. The lack of growth among them is paramount in understanding what took place in ’08 as potential new buyers ceased to exist and banks gave credit to anyone to keep the party going…’08 (and what has come since) was an entirely predictable demographic caused crisis. 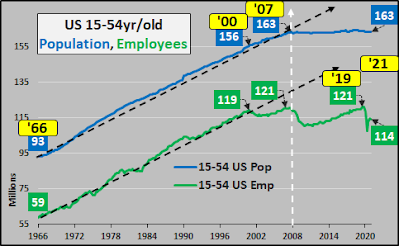 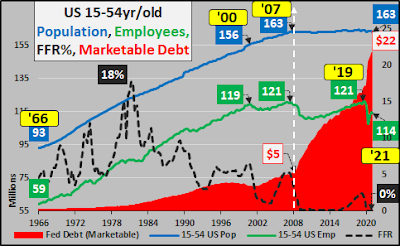 Same as above but inclusive of Federal Reserve balance sheet (aka, QE…yellow line) and Wilshire 5000 (representing all publicly traded US equities…light blue line). Since the end of working age population and employment growth, virtually free money has been passed to the largest and best connected US institutions / individuals. This, alongside the Federal Reserve purchasing Treasury bonds (to artificially lower the cost of federal government borrowing and boost the supply of dollars chasing the remaining assets) and mortgage backed securities (to artificially lower mortgage rates) has resulted in an asset explosion. This explosion has rewarded asset holders with vast riches and punished young adults, the poor, those on fixed incomes. These folks in the latter group get none of the asset wealth effect but instead get the fast rising costs of living due to the asset appreciation. When the Federal Reserve continually suggests they aren’t responsible for the exploding US inequality…it is a bald faced lie. 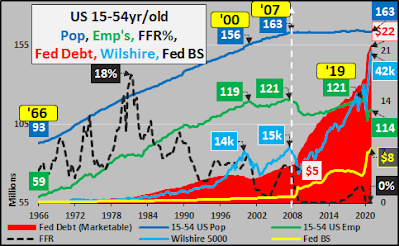 Same as above, but focusing on the 15 to 54 year old employment to population ratio (not the silly unemployment numbers the BLS puts out…just dividing the population by those employed among them…white line). The Federal Reserve has two Congressionally mandated jobs…”promote effectively the goals of maximum employment, stable prices, and moderate long term interest rates.” You can forget stable prices (as the Fed has, via a system of discounting inflation) and just focus on full employment. As you’ll note, the US has achieved “full employment” four times since the inclusion of females into the workforce…’89, ’00, ’07, ’19…each time with employment around 75% of the available population. But note the declining rates, resulting in greater debt, resulting in soaring asset bubbles (and once those failed) notice the soaring QE and zero interest rate policy…resulting in the greatest rise in asset appreciation in US history. Asset holders made rich (for being asset holders)…those with little or no assets made poor (for not being asset holders). Simple stuff. 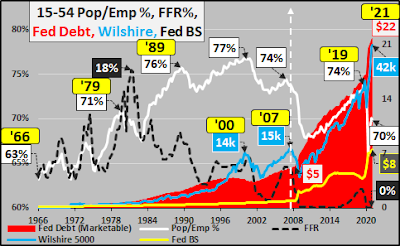 Below, again 15 to 54 year old horizontally moving population plus falling employed among them, ever lower Federal Funds Rate, and ludicrously vertical Wilshire 5000. In case you are wondering, this asset explosion is not a naturally occurring phenomenon against over a decade of zero working age population growth and seven million fewer employed among them. Nah, this looks like a currency collapse in progress…and once it goes vertical (Wilshire, Bitcoin, etc.)…you know you haven’t got much longer to go (although we likely have significantly further to go in the vertical explosion…before the whatever it is that follows). 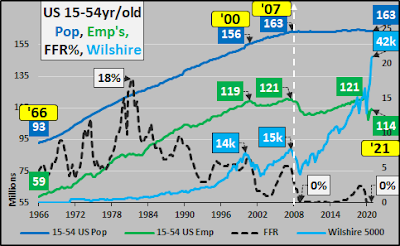 While nobody can say whether immigration will return to high levels, fertility rates and births are scraping record lows…and simply gauging the feeder population that is the 15 to 24 year olds (chart below of population / employed among them), you should have a fairly good idea of why a return to a growing working age US population isn’t likely. 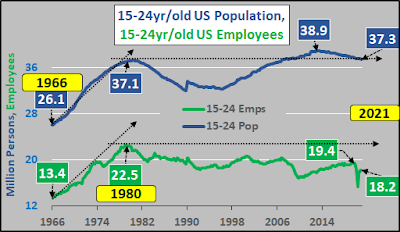 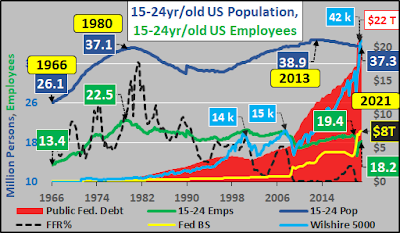 Finally, here’s how this plays out regarding the most fundamental of human needs…shelter or housing…plus I’ll stretch out to the 15-64yr/old population and employed among them versus annual housing starts and the Federal Funds Rate (%). The Federal Reserve purchasing of MBS / QE has artificially pushed mortgage rates to record lows to induce an artificial housing frenzy amid a secular turn to outright declining potential buyers and soaring quantity of potential sellers (elderly who already own homes). If I didn’t know better, I’d think the Fed hates young adults and is setting them up to be the bag holder of an awful oversupply of very expensive housing when the bottom invariably falls out…again. 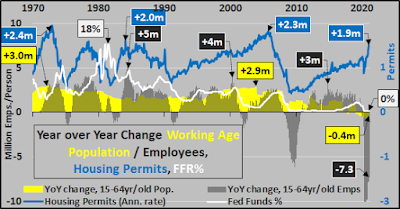 Some say these are the seeds of the second American revolution as a class of unelected, undemocratic central bankers enrich a tiny majority at the expense of the majority…but I just like making colorful charts.

For those curious how this looks on the widest possible cross section of population/potential employees, the following are the same charts but showing the 15 to 74 year old population and employees among them. 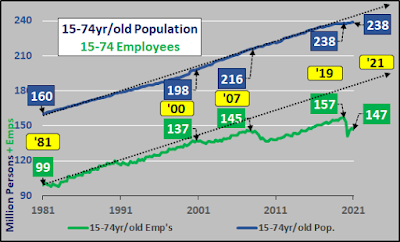 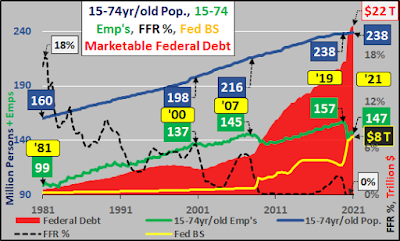 Last chart is pretty important, because it really highlights the declining participation of the aging population…suggesting that “full employment” will be significantly lower than ’06 and ’19 at much greater expense and require significantly greater QE to enable it all. 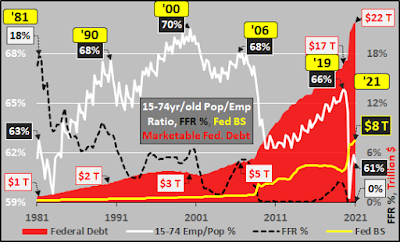